Southold Democrats: It ain’t over yet 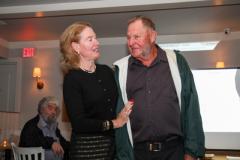 Southold Democrats have announced that they are not conceding a loss for town council candidate Mary Eisenstein or highway superintendent candidate Eugene Wesnofske until the absentee ballots are counted by the county board of elections.

“There are currently 517 uncounted absentee ballots at the Board of Elections, which could potentially swing one or both of those races in the favor of our candidates,” the Southold Democrats’ campaign manager Kathryn Casey Quigley said in a statement.

Southold Republican leader Peter McGreevy said as of 3 p.m. Thursday the board of elections had 543 paper ballots in hand. “Mr. Ghosio only needs 39 percent of those ballots to prevail and we are confident the results will hold,” he said.

“As for the Highway Superintendent race, Mr. Orlando is up by 287 votes, so the Southold Dems can hope, but there will be no change,” McGreevy added.

“We will await the recount and counting of absentee ballots, which the BOE informs us should be final sometime late next week,” Quigley said. “We look forward to the final results.”