-A A +A
By:
Tara Smith
Publication:
The Long Island Advance 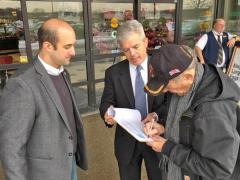 Last month, as the first NYS Assembly legislative session began, Dean Murray (R,C,I-East Patchogue) was eager to reintroduce a bill tackling sex offender restrictions, or the lack thereof. Since the start of 2016, some Level 1 sex offenders began to come off of the registry, when a state appeals court decision removed all local restrictions on where convicted sex offenders may reside.

According to the ruling, the laws in place were becoming “too restrictive” and were therefore wiped clean. As is stands today, the only restrictions in place prohibit high-level offenders who are on parole or probation from living within 1,000 feet of a school.

Murray’s bill, A.1651, is a revamped version of a bill he introduced in response to the ruling last year but was eventually killed in the corrections committee last April. “A convicted rapist should not be allowed to move in across the street from their victim,” Murray said in an interview last week.

This time around, Murray has more support from Democrats.

Earlier this month, County Executive Steve Bellone and Suffolk County Legis. Rob Calarco, deputy presiding officer, spoke with numerous parents and residents in Patchogue to encourage support for taking action. Bellone and Calarco urged residents to sign a petition that would save the Suffolk County Community Protection Act. The law, which was enacted four years ago, is a model for laws ensuring sex offender registration and compliance. Though it has been successful in keeping neighborhoods safe, the 2015 court ruling preempted all municipalities that already had restrictions in place.

“This is something we’re not comfortable with,” said Calarco.

“The parents are aware, and we are working very closely with the Suffolk County police to monitor the situation,” Pat-Med Superintendent Dr. Michael Hynes said in December. “It makes us nervous,” Calarco added. “He’s living near kids who are around the same age as his victims that he committed the act against.”

The Suffolk County Protection Act has helped track and verify information about where offenders live. The police department works with Parents for Megan’s Law to check at least twice a year to confirm that they still reside where they say they are.

“It’s been effective in dealing with recidivism,” Calarco explained, adding that it helps law enforcement keep a better eye on offenders and, in some cases, verify their workplace and online activity as well.

Murray’s legislation would allow counties to put residency restriction laws into effect. “We know they have to have some place to live and be able to come back into society after serving their jail time, but they shouldn’t be close to a place where young children congregate,” Calarco said.

“It’s a collaborative effort,” he said, noting that he and Bellone fully support Murray’s bill. After collecting signatures in Patchogue with Calarco and in Miller Place with Legis. Sarah Anker, Bellone delivered the signatures to Albany last week.

“It’s great to have support from Democrats,” Murray said. “This isn’t a partisan issue. We’re talking about the safety and protection of children and families. It’s not about who gets credit,” he added.

Calarco and Murray both said that the bill has been met with some opposition, primarily from New York City lawmakers. “They have a different makeup than suburban counties,” Calarco said.

That’s why Murray’s bill is not asking the state to pass a blanket law that would affect counties statewide. “The most important thing is reasonable residency restrictions,” Murray said, emphasizing ‘reasonable.’ He also explained that the power to make these restrictions needs to be returned to a county — not a town — level. “It’s local enough, but not hyperlocal,” he said.

Previously, municipalities took restrictions over the top, leaving some offenders with no place to live. “That’s the balance you have to weigh. You can’t overly restrict someone to the point where they have nowhere to go,” Calarco said, explaining that those kinds of things happened in Nassau County, which is why the judge decided to wipe away the restrictions.

“On a conceptual level, we’re all on board,” Murray said. Currently, Murray is working with other members of the Assembly to cover concerns and eventually come together. He said that he would be perfectly willing to reevaluate some of the areas that raised concern for majority members. An example is the length of time that Level 1 offenders remain on the registry. Currently, Level 1 offenders must register for 20 years after they are convicted. Murray would like to see that extended to 30 years.

Those opposed to extending that time frame point to a younger teenager who is 15 or 16 dating someone who is 18 or 19. “Are they really sexual predators or did they get caught and upset the parents?” Murray said. He did explain that the bill includes a provision for anyone convicted under the age of 21 who is not a repeat or violent offender to come off automatically after 20 years, as long as they haven’t been convicted of any crime since then.

Some still feel 20 years to be too many, but Murray focused on the importance of keeping families safer. “I understand that, and we’re willing to make adjustments for reasonable concerns to make this the best bill we can,” he said.

The current session ends in June and though the bill is not yet sponsored by a state senator, Murray explained that state Sen. Tom Croci (R-Sayville) would likely carry the bill in the Senate. “I’m very hopeful to get it done this year, or this session,” Murray said. “I look forward to the day when the governor signs this into law.”