North Fork students ‘March for Our Lives’ in D.C., NYC

-A A +A
By:
Nicole Smith
Publication:
The Suffolk Times 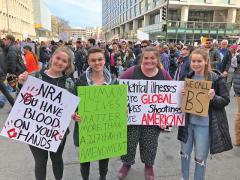 Inspired by the survivors of mass shootings around the country, locals showed their support for gun control this weekend by walking in March for Our Lives events Saturday in Washington, D.C., and New York City.

March for Our Lives was organized by students from Marjory Stoneman Douglas High School in Parkland, Fla., who survived a mass shooting on Feb. 14. Seventeen students and educators were killed there that day.

Over 800 protests were planned in all 50 states, as well as on every continent except Antarctica, The New York Times reported.

The Southold Democrats chartered a bus for about 40 East Enders who are passionate about gun reform to travel to Washington, where they marched with over 850,000 people from across the country.

“We kind of wanted to go to the source, to the root of the movement,” said Mackenzie Daly, a senior at Mattituck High School. “I think it’s so monumental to be on politicians’ front lawns, the people who are failing us, to be there and for them to hear our chants in their offices. That’s something so special.”

Among the most notable speakers at the march in D.C. was Stoneman Douglas High School senior Emma González.

Her speech and a period of silence lasted 6 minutes and 20 seconds — the same amount of time it took for 17 of her classmates and teachers to be killed with an AR-15.

For Mackenzie, who boarded the bus around 4:30 Saturday morning with three of her closest friends, Emma’s speech was the most impactful.

“She’s such an empowering young woman,” Mackenzie said. “It was so poignant to see her speak and be in the same area as her.”

Mattituck sophomore Jillian Orr, who made the trip to D.C. with her mom, said, “Instead of just seeing it on the news like you would see any other tragedy or any other headline, it was like you were living it. Because these children did live it and many of them described their experience. It touching and a little bit painful too to know they had to live through this.”

“The speakers really impressed me because it was truly all about the kids,” he said. “You can’t be in a crowd of people that size, hearing these stories of these children’s experiences of huddling in classrooms while this person is outside in the hallway killing their friends, without crying.”

A view of some of the thousands of people who participated in the rally in Washington Saturday. (Courtesy photo)

Many agreed that the focus of the day was the students, since that’s who many are trying to protect by lobbying for stricter gun laws.

Congressman Lee Zeldin said in a statement that he supports banning bump stocks, fixing the National Criminal Instant Background Check System and “ensuring lunatics manifesting violent criminal intentions to murder with firearms have access to none.”

He also said he introduced the Protect America Act of 2015, a bill that is aimed at preventing terrorists from acquiring firearms and explosives, and voted in favor of the STOP School Violence Act. Mr. Zeldin has received thousands of dollars in contributions from the National Rifle Association.

“The more people of all ages participating in our great American process the better,” Mr. Zeldin said.

“It was a great experience and it was worth the drive,” said Ms. Renner. “Kate is very outspoken. I think she benefits from the experience of the rally and learning that she has a strength in her voice.”

Ms. Renner said she carried a sign saying, “We have your back. We will help you.”

“That’s why we went,” she said. “I wanted the kids to know we have their back. It’s really all about the kids.”
Owen Searl of Mattituck, 11, attended the March For Our Lives event in New York City Saturday, and was moved by the number of people there and the message they were sending.

“I think it’s so great what people are doing to help stop gun violence,” said Owen, a sixth-grader at Peconic Community School. “I think kids are going to make the difference.”

Owen wanted to send a message to the Parkland school shooting victims and survivors that he stands with them and that this should never have happened.

“One of my favorite parts was when we were going past Trump Tower and everyone was just so alive,” Owen said.

“What we were doing right then and there, it felt like we were definitely going to make a difference.”