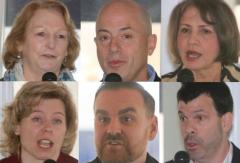 Seven people vying for the chance to run against Lee Zeldin in November pitched their candidacies Saturday morning at a breakfast event hosted by Southold Democrats at the Hellenic Snack Bar in East Marion.

Zeldin (R-Shirley) will seek election to a third term this fall. Democrats looking to unseat him believe he is a vulnerable incumbent, citing his allegiance to President Donald Trump, an appearance in his behalf at a campaign fundraiser by former Trump strategist Steve Bannon and his postion on issues they say show he is “out of touch” with residents in New York’s First Congressional District.

But Trump won 52.77 percent of the Suffolk County vote in 2016, an election in which Zeldin, seeking re-election to Congress for the first time, bested his Democratic challenger 58.22 percent to 41.78 percent. Nevertheless, Democrats believe the momentum is on their side this year.

The field of Democratic hopefuls includes two former county legislators, a businessman with roots in New York City, an activist and organizer who also has NYC roots, a village trustee, a scientist and a bartender.

The candidates introduced themselves to the crowd of about 70 people and spoke about their motivation for running against Zeldin. They then fielded questions from residents that were submitted in advance and posed by Southold Democratic Committee vice chairperson Liz Smith.

There was not much daylight between the positions the candidates articulated on issues like the need for universal health care, immigration reform, climate change and the environment and gun control.

The choice for voters looking for a change in the First Congressional District may just come down to the answer to this question: Which candidate stands the best chance of beating the incumbent Zeldin?

Kate Browning, 57, of Shirley, a native of Belfast, Northern Ireland, represented the Suffolk County Legislature’s Third District from 2006 through 2017, when she was term-limited out of the legislature. Before her election to the legislature, she was a school bus driver for the William Floyd School District. (Zeldin was a student on her bus, she said, drawing laughter from the crowd.)

“I grew up a Catholic in Northern Ireland. My parents taught me to fight for what I believe in,” Browning said. “I do and I don’t back down. I’m blue collar. I have fought for blue collar workers. I’m the wife of a military veteran and have two sons in the military…Lee Zeldin is totally out of touch. He plays partisan politics and doesn’t do what he should for our district.”

“The third legislative district not unlike CD-1. It is a high-Republican district. I never won with less than 57 percent of the vote. I can take out Lee Zeldin.”

Elaine DiMasi, 48, of Ronkonkoma is a former Brookhaven National Lab physicist who is asking voters to “embrace science” and elect a scientist to Congress.

“We can create a clean energy economy on Long Island,” DiMasi said. “Clean energy can create new jobs… I dare the fossil fuel lobby to push me around with what they call facts,” she said.

“As a scientist I know almost anything is possible. We do things once thought impossible all the time.”

Perry Gershon, 55, made his East Hampton home his full-time residence and registered to vote there last year. He is recently retired from his private equity firm in order to run for Congress.

“We need to step up and fight this wave of what could be authoritarianism,” Gershon said.

Brendon Henry, 36, of Center Moriches, is a bartender who says he and his wife both have to work two jobs to make ends meet on Long Island.

Bruce Miller, 71, of Port Jefferson, is a village trustee there, elected in 2014. He is a former teacher and Port Jefferson school board trustee.

“If you want change, do different,” Miller said. He said he supports DACA and supports immigration. “We need to have control so we’re not importing people who are lowering the wages of union workers,” he said.

David Pechefsky, 49, of Port Jefferson, worked for a NYC nonprofit that promotes civic engagement among young people before launching his congressional campaign. Prior to that, he worked in NYC government and for the National Democratic Institute in the Somalia Program. He grew up in Patchogue.

“I believe we can have a better country — an economy that works for everyone
and a foreign policy driven by diplomacy not just the priorties of defense contractors,” he said.

Vivian Viloria-Fisher, 69, of East Setauket, served 13 years in the Suffolk County Legislature — six of them as deputy presiding officer — before being term-limited in 2011. Born in the Dominican Republic, she emigrated to the U.S. as an infant, and has been a resident of Suffolk County for 49 years. She is a retired teacher. Viloria-Fisher mounted an unsuccessful campaign for Brookhaven Town supervisor in 2013.

She said she was driven to run by Trump’s budget blueprint, which was “eviscerating our science research, our health research and our arts.

“If we leave arts and sciences behind and have no empathy for the sick, we have an existential crisis,” Viloria-Fisher said.

She said she supports a woman’s right to choose, while “Lee Zeldin supported the law that said women had to have a sonogram before they could have an abortion.”

As the “first Latina ever elected in Suffolk County,” Viloria-Fisher said, “I will bring a fresh new face to the representation of CD-1 in Washington, DC.”

Zeldin spokesperson Katie Vincentz said he has shown his willingness to work with “anyone interested in finding common ground” to move the country forward, “putting the people he represents over party.”

Vincentz cited several examples of Zeldin supporting bipartisan efforts, including support of reauthorizing the Child Health Plus program and opposition to the Interior Department’s plan to open the outer continental shelf off New York’s coast to oil and gas exploration.

“The congressman works harder than anyone else to deliver positive results to grow our economy, protect our security and improve in many other ways our community, state and nation,” Vincentz said.

NY-01, which has sent both Democrats and Republicans to Congress, is considered a swing district. Geographically, the district encompasses most of Suffolk County.

The Democratic Congressional Campaign Committee, the official campaign arm of the Democrats in the House of Representatives, lists NY-01 among 101 “battleground” districts targeted for support in the midterm election. The national campaign committee’s support means crucial assistance with organization, workers and fundraising.

The federal primary election takes place this year on June 26.

Zeldin currently has nearly $1.3 million cash on hand, according to the most recent campaign disclosure filings with the Federal Election Commission.

Gershon leads the field of Democratic hopefuls in fundraising so far, with more than $1 million raised and over $812,000 cash on hand according to his year-end filing.