Answers to Your Questions on How to Vote in November

By:
By Michael Gormley
Publication:
Newsday 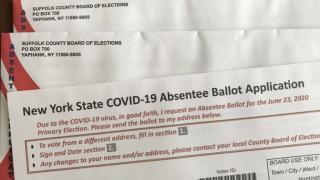 New Yorkers have three ways to vote in this year’s general election on Nov. 3.

Absentee ballots
This year, any voter may receive an absentee ballot if they are concerned about the spread of COVID-19 at polling places.

Voters may request absentee ballots from their county board of elections by mail, email, fax, telephone or by visiting.

Absentee ballot applications may be downloaded in English or in Spanish at www.elections.ny.gov/VotingAbsentee.html. A voter should complete the application and check "temporary illness or physical disability" for the reason, which would include concern about contracting the COVID-19 virus.

A voter may also apply for an absentee ballot through the state’s new Electronic Absentee Ballot Application Portal: absenteeballot.elections.ny.gov.

Applications that are mailed, emailed, faxed or completed online must be postmarked or dated no later than Oct. 27. In some cases, mostly in Brooklyn and Nassau, ballots had incorrect names on return envelopes. Those voters will be sent accurate envelopes. In New York City, absentee ballots and military ballots are one form. A civilian voter can vote by absentee ballot on a ballot marked "military" if that is what they received.

The Postal Service can’t guarantee timely delivery of mailed applications if sent less than 15 days before Election Day. Election officials and the Postal Service have agreed that voters may mail ballots with a single first-class stamp costing 55 cents, even though the weight of the ballot would normally be more.

Voters also may apply for absentee ballots in person at county boards of election up to Nov. 2.

Once voters decide whom to vote for, they must mark their choices on the ballot and then place it in the security envelope provided. Voters are encouraged to use blue or black ink pens because they are the darkest and best for computer scanning, but ballots completed in other colors or in pencil can be accepted by county boards. However, officials warn that pencil submission may smudge and so could require a voter to resubmit the ballot.

Sign and date the outside of the security envelope where marked. Then, seal the security envelope, place it in the return envelope and seal that. For some voters in Suffolk County, the bar code for automated handling of the ballot doesn’t show through the window in the return envelope as specified. Elections officials said those votes would be counted by hand.

The ballot must be mailed early enough to get a postmark no later than Nov. 3.

Early voting
Voters can go to selected polling sites to vote early from Oct. 24 to Nov. 1. County board of elections websites provide the locations, hours and days for early voting sites. Click here for Nassau and here for Suffolk.

Election Day
Voters may vote at their regular polling places from 6 a.m. to 9 p.m. The traditional number of polling sites will be open in each county, although in a few cases the sites have moved nearby. The polling sites are listed on each county board of elections website. The state Board of Elections has a web portal through which voters may find their polling place as well as sites for early voting at https://voterlookup.elections.ny.gov/.

Voters who submitted absentee ballots can overrule that vote by casting another at their polling place on Election Day.

Voters who are told they are no longer registered at the polls may sign an affidavit ballot. Rulings on those votes would be made in the week after Election Day.